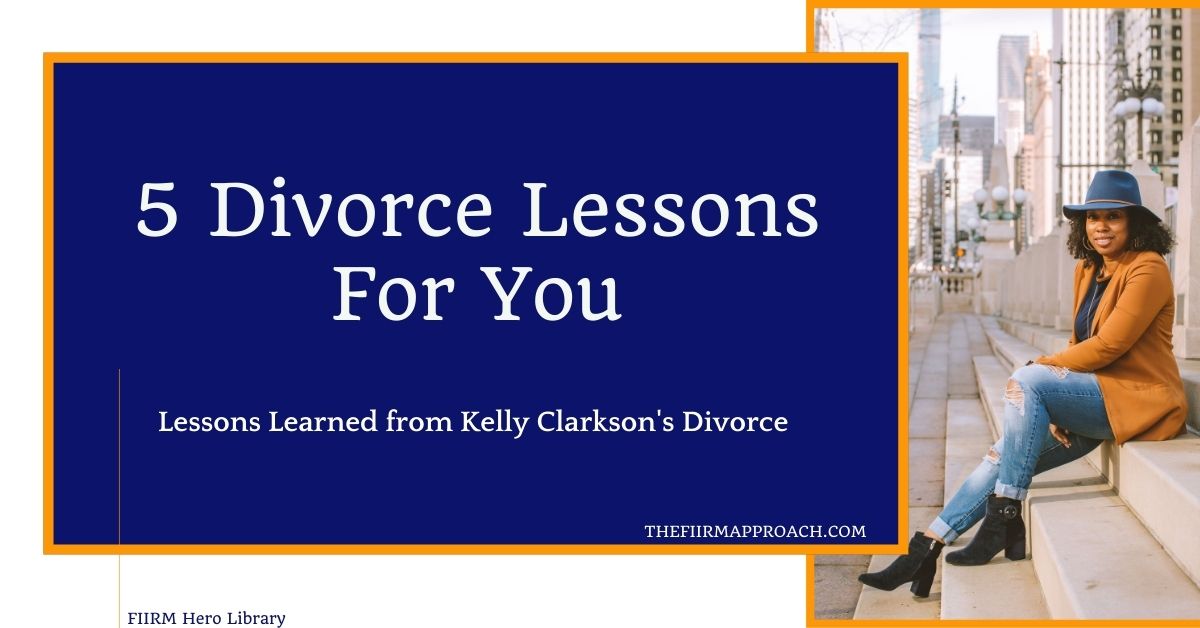 The dollars were big, the relationship turned hostile, and it appeared she was just trying to keep it all together when she probably wanted to kiss his a$$ goodbye… and many of us can relate to at least 1 of those!

While most of us don’t have Kelly Clarkson’s fame or her money, it doesn’t mean we don’t have her drama, or potentially could.

So my friend, if you are a married or unmarried woman, this post was written with the intention of giving you some lessons that MIGHT be helpful at some point in your life.

This post is not intended to make fun or light of, or for that matter be disrespectful in any way to Kelly’s divorce journey. The experience sounds like it sucks and outsiders like you and me will NEVER know all the details, yet here we are.

Disclaimer: These lessons are NOT advice for your personal situation. Time and dates referenced are based on publicly reported/available information

Lesson: Filing for divorce stops the clock in most situations. Why does this matter to you? Because I NEED you to understand that saying “This marriage is over”, moving out, or draining the account doesn’t constitute the “end”. Too many of us “stay in divorce decision purgatory” for too long. It’s not an easy decision to make, but it’s not official until it’s official — which means that sometimes not filing sooner can have negative financial implications.

According to Life and Style mag, Kelly was awarded primary physical custody

Her soon-to-be-ex asked for joint physical and legal custody as well as over $400,000 in monthly support (including both spousal and child support)

Lesson: DUDE! $400K a month. Stop playing!! Anyway, I digress… The lessons about spousal and child support can be complex and are HIGHLY dependent on the family’s circumstances (location, income disparity, fit, age of children, etc.) however let’s focus on some important, relatively general, bits:

Kelly asked for their prenup to be upheld

Lesson: Marital property is an asset acquired during the marriage. These assets may be purchased by either spouse, however, a prenup may dictate otherwise as far as the split of such assets when you divorce.

According to TMZ, Kelly’s STBX wanted all assets acquired during the marriage to be split evenly, as well as the income earned while they were married. Kelly’s prenup, if upheld, would prevent this from happening.

While it is possible for a prenup to be deemed invalid, it doesn’t happen often unless it was signed under duress, contained false information, not signed by both parties, or the terms are deemed unreasonably unfair/biased.

In 2021, Kelly asked the court to declare her legally single and restore her last name

Lesson: This is not uncommon, especially for divorces that are drawn out. The divorce may not be settled but the marriage can be declared officially over. AKA – Mingle like you’re single, legally!

If you are preparing for a divorce or in the middle of one, please take note of some of the details of this divorce journey. The life of a celebrity can seem so different from yours, and, in a lot of ways it is. However, while we may not be able to hire the most skilled lawyers in the country to argue in our favor, the underlying principles of the law are fame agnostic.

Think about how you would respond to each of the situations described above.

If your response is that you would go CRAZY on your STBX, then it’s time to practice some patience and deep breathing, and maybe even grab the Silent Preparation Series as this digital resource can help you understand what to expect and how to prepare for a divorce.

Nikki is a 16-year financial services professional, a Certified Divorce Financial Analyst ®, and the primary divorce financial strategist for The FIIRM Approach. She helps female breadwinners prepare for divorce to avoid common financial mistakes and confidently maintain their financial security. She uses proven strategies within the FIIRM Approach methodology so her clients can manage their money, debt, and credit in their new financial life. TAKE ACTION & LEARN about the tools that can help make your new money life easier. Grab your FREE Ultimate Resource Guide HERE.